The permanent version of this post - with comments (if any) - is at
http://sensicomm.blogspot.com/2015/10/pebble-watch-programming-to-extend.html 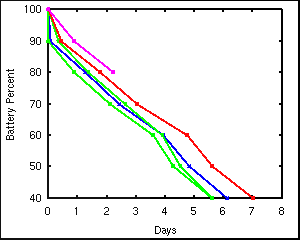 These are my observations to date on battery life with the Pebble classic watch. I figure the data will be of interest to other watch face developers.

For my own Pebble watchface I wanted:
Once it was running, I wanted to measure and optimize battery life. The watch reports battery state in 10% increments, so I track the level changes as a function of time.
Pebble has some hints online at developer.getpebble.com/guides/best-practices/battery-perform-guide/ . Basically, they say to do as little as possible when servicing the timer ticks, and minimize the portion of the screen that's updated.
The plot here was obtained with the watchface shown in my previous post: blog.sensicomm.com/2015/09/pebble-watch-programming.html . The green lines are the first version: I call the routines to update everything on the screen every second. For the blue line, I update the seconds display every second, but the rest of the display only updates every minute. For the red line, I update the seconds every second (obviously), the hour and minute update when the minute changes, and the day updates every hour. The short magenta line is like red, except I turn the backlight off (instead of auto) and turn the watch off at night. Bluetooth was off in all cases.
Observations:
Again, this is for the Pebble Classic; no idea how it works on other Pebbles.

To make or view comments, see the original post at
http://sensicomm.blogspot.com/2015/10/pebble-watch-programming-to-extend.html