The permanent version of this post - with comments (if any) - is at
http://sensicomm.blogspot.com/2010/11/saltwater-immersion-testing.html 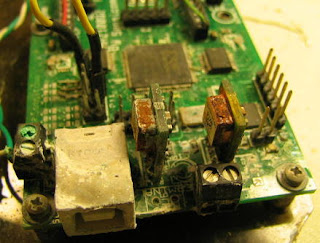 I've been working on a project that uses a custom A/D-FPGA board to generate and process sonar signals. Basic functionality is working, so the client took it to the dock for some live testing.
The testing included an "unscheduled" saltwater immersion experiment, with power applied to the board no less.
It was recovered after 24 hours; effects on the circuit were not beneficial.
So far, it looks as if the flash memory and A/D converters survived with just minor corrosion on the leads. The FPGA is interesting: definitely nonfunctional, and there's a pit where the epoxy case is crumbly. I suspect that the 1.2 volt switching regulator went out of range and fried the FPGA core.
Next time we plan to use a waterproof case.

To make or view comments, see the original post at
http://sensicomm.blogspot.com/2010/11/saltwater-immersion-testing.html